Home Gold This Gold Stock Belongs In Your Portfolio

Our view of the gold market is that it’s one of the most stable places to grow your long-term wealth.

That’s why we’re going to show you an easy way to make a 55.9% profit from gold’s continued rally this year.

Money Morning Resource Specialist Peter Krauth’s gold price prediction shows the metal rising another 8.2% to $1,400 by the end of 2017.

But we have a way to take advantage of the gold price rally for even bigger gains. Money Morning Executive Editor Bill Patalon is currently recommending one particular gold mining stock that analysts say could rally as much as 55.9% over the next 12 months.

We’ll show you that gold mining stock in just a minute. First, here’s why we’re so bullish on gold – not just in 2017, but in the years to come…

Why Gold Market Prices Will Only Grow Over the Next Decade

After nearly 10 years of interest rates in the 0%-0.25% range, the Federal Reserve is committed to gradually raising rates again. It has hiked rates three times since 2015 and expects two more this year.

And this high interest rate environment we’re currently entering will be a long-term boon for gold prices.

“U.S. Federal Reserve rate hike campaigns have been followed by even stronger increases in gold prices,” Bill said. “In fact, if you overlay the charts, gold rises almost in lockstep with rate increases.”
Just take a look at the 1970s, when interest rates soared from as low as 3% at the beginning of the decade to as high as 15% by the end of it… 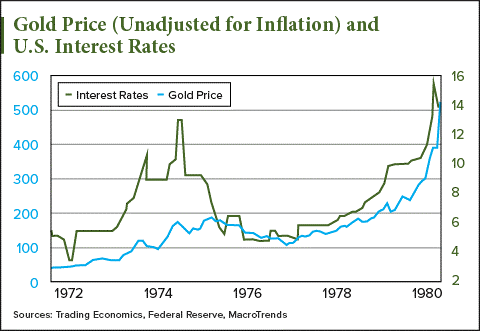 The 1970s gold price rally shows that over the long term, higher interest rates help lead to higher gold prices. And this chart below indicates history may be repeating itself right now… 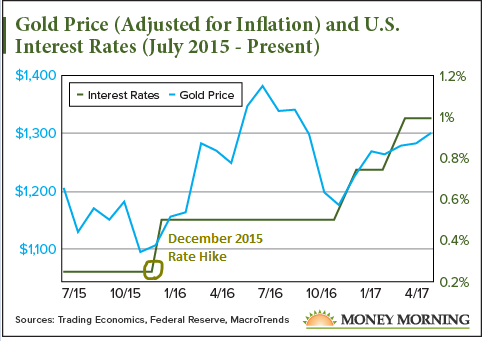 As the chart shows, after a period of historically low interest rates, the Fed is raising rates again.

On Dec. 16, 2015, the Fed raised interest rates for the first time since it dropped rates to near-zero levels in December 2008 to help heal the economy following the Great Recession.

This is one reason Bill – a senior research analyst with more than 30 years of experience whose recent stock picks have brought readers profits of 818% – believes one gold mining stock belongs in your portfolio. This company is one of the world’s largest miners, with operations all across North, Central, and South America.

It also happens to be one of the world’s most efficient gold miners, boasting an $800 all-in sustaining cost (AISC), much lower than close competitor Newmont Mining Corp.’s (NYSE: NEM) AISC of $900. That means it only costs Goldcorp $800 to mine each ounce of gold, giving it a profit margin of $494 based on gold’s current price of $1,294.

Here’s our gold stock recommendation, which analysts expect to soar as much as 55.9% in 12 months…

Goldcorp’s rising production capacity and increasing efficiency are the biggest reasons we’re recommending it today. The firm recently announced plans to hike gold output by 20% through 2022. This will provide a huge boost to profits as the gold prices rally over the long term and the company makes more money on each ounce produced and sold.

To increase production, Goldcorp acquired Kaminak Gold last year to gain control of the Coffee Gold Project in Canada’s Yukon Territory. Construction on the project should begin in mid-2018 and is expected to raise Goldcorp’s annual output by 2.2 million ounces. That – combined with Goldcorp’s stake in Chile’s Cerro Casale gold mine shared with Barrick Gold Corp. (NYSE: ABX) – will help lift the Goldcorp stock price higher this year.

We’re also bullish on GG due to the firm’s mining efficiency.

The biggest indicator of mining efficiency is a company’s AISC – a measurement of how much it costs a company to get one ounce of gold out of the ground.

Goldcorp’s AISC has improved significantly in the past year, falling from $836 per ounce in Q1 2016 to $800 last quarter.

With both output and gold prices expected to grow, the profit margin can only grow alongside them.

Admittedly, GG stock has dropped over the last four months. Since its high of $17.67 on Feb. 16, shares have nosedived 20.1% to $14.11. But we don’t think it will stay this low for long, especially as its improved efficiencies help it continue to beat earnings expectations.

On April 26, the firm posted earnings of $0.10 per share, beating Thomson Reuters analyst forecasts of $0.08. It’s also expected to earn a total 2017 earnings per share (EPS) of $0.36, indicating quarterly EPS is expected to grow throughout the year. That could mean a huge rebound for Goldcorp stock, and it means you can buy it at a discount right now.

The Bottom Line: The gold market is in good shape this year and expected to strengthen over the long term thanks to the Fed’s current rate hike campaign. To profit from that, we recommend investing in Goldcorp. Its soaring production and low AISC make it a must-have investment for your portfolio right now.

It Looks Like Higher Gold Prices Are On The Way!

The #1 Reason You Should Consider Gold Stocks

Is It Time To Buy Gold?

This Precious Metal Is Better Than Gold Today