The juggernaut that is Amazon.com Inc. (AMZN) keeps rolling on, spending as much as its 301 million active users make for it. One industry after another, Amazon is putting its flag in the ground, cementing itself as the global leader in virtually everything.

Left reeling in its path are companies that are having to adapt or are close to giving up as the Bezos empire grows. Whether it be its acquisition of Whole Foods Market Inc. (WFM), its potential partnership with Nike Inc. (NKE) or one of its many new departments like “Wardrobe and Handmade,” Amazon is flying. (See also: Introducing Your New Wedding Planner: Amazon)

In the past month, Amazon’s stock has traded above $1,000 a share, its market cap has surpassed $500 billion, and Bezos has dethroned Bill Gates as the richest person in the world. It’s certainly good to be Jeff Bezos – not so these seven companies. 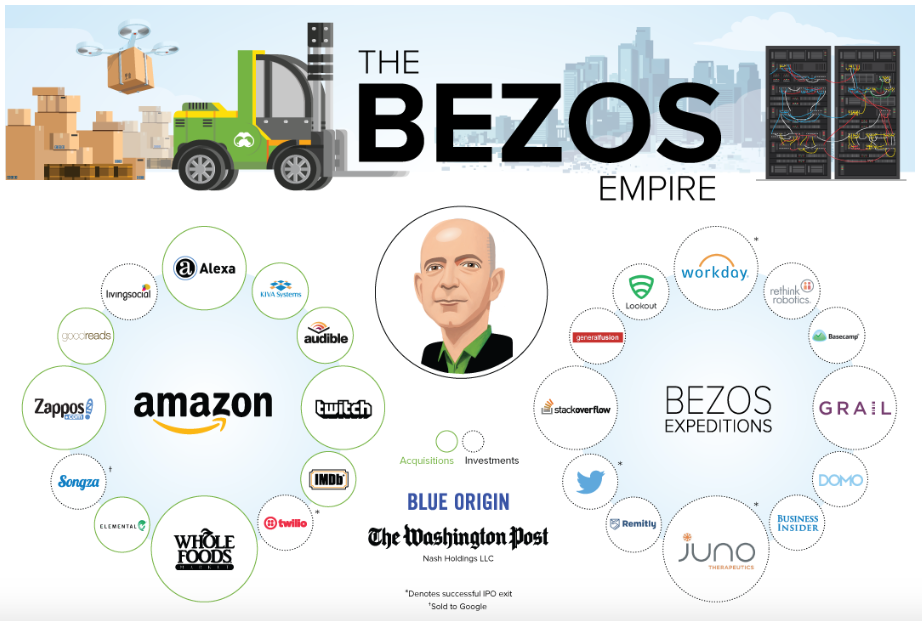 The first retailer to come off the shelf (so to speak) was Barnes & Noble Inc. Amazon, which started as an online bookstore in 1995 is now the world leader in book sales. Launched in 2007, Amazon Kindle is now the dominant player in the book market. In 2014, Forbes estimated that Kindle makes up 19.5 percent of all book sales globally, and according to Morgan Stanley, Amazon has sold $5 billion in Kindle devices. Since then it’s been uphill for Amazon and downhill for the retailers.

In July 2015, Barnes & Noble’s share price reached an all-time high of $28.66, but as Amazon grew, so did B&N’s skeptics. Since that time Amazon shares have more than doubled while shares in Barnes & Noble have plummeted, making an all-time low Wednesday, trading at $6.80 a share, down 76 percent from its 2015 high. How long can Barnes & Noble hang in there? Quartz recently ran an article titled “For nearly every bookstore Barnes & Noble loses this year, Amazon will open a new one.”

The decline of Macy’s Inc. has been coming for a while, and Amazon’s growth has hastened its downfall. Macy’s 2017 first-quarter earnings disappointed, missing estimates across all metrics. The report of a 39 percent drop in profit was followed by 17 percent plunge in the stock price. The shares have been unable to recover, making a seven-year low in June. The most recent hit was news that Amazon was introducing Amazon Wardrobe, a service where customers can try-before-you-buy with apparel, which analysts’ believe is a game changer. In a May research note, Morgan Stanley estimated Amazon accounts for 7 percent of the apparel market and expects this to reach 19 percent by 2020. (See also: Macy’s Suitor Reportedly Hasn’t Lined Up Financing)

Costco Wholesale Corp. (COST) was once the big fish in the retail market pond. Its subscription model was the first of its type, putting pressure on the everyday retailer. However, as Amazon continues to climb, Costco has stalled.

In 1993, Costco merged with Price Club, and in 24 years subscriptions surpassed 80 million. Compare this to Amazon Prime, which launched in 2005. As of July 2017, there were 85 million Prime members and growth is headed in the right direction. Year-to-date, Amazon has added 10 million new members and has doubled its subscriber base in a little over two years. 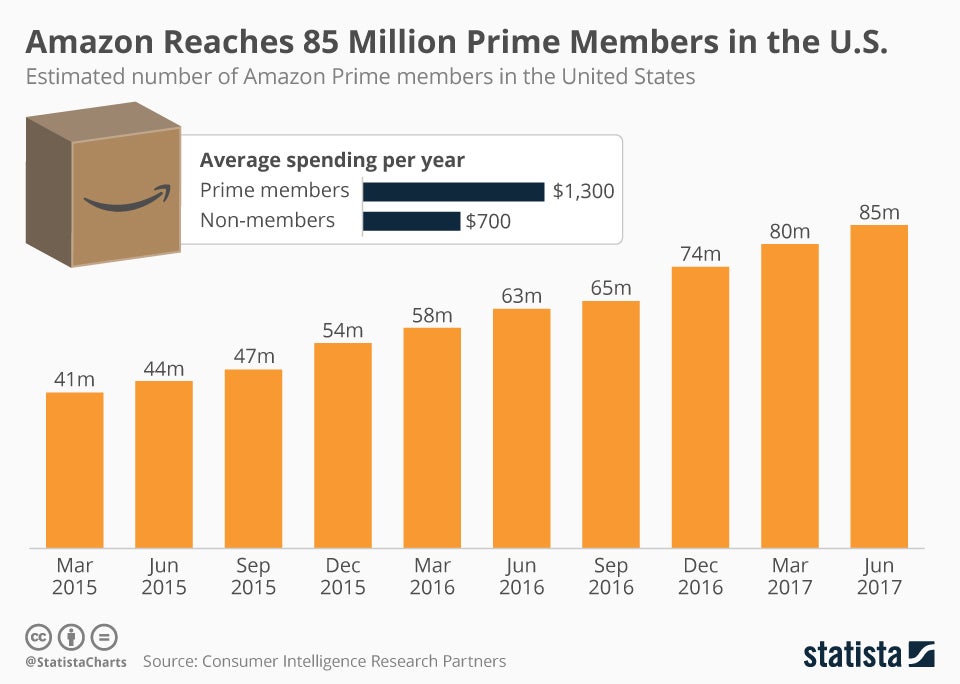 While Costco is not simply a grocery store, the deal between Amazon and Whole Foods was a hit to Costco and its investors. After the announcement of the acquisition, shares of Costco fell 10 percent and have slid into bear territory, trading to $150 per share – its lowest level since December 2016.

Etsy Inc. (ETSY), the online marketplace for boutique goods has been on a job-cutting spree of late, firing 22 percent of its staff in two rounds. The cuts come as big brother Amazon expands its Handmade brand, which was launched in 2015. Some Etsy sellers refused to list on Amazon after complaints it was copying their products and selling them at a lower price.

Amazon’s growth has squeezed Etsy’s margins to a point where listings continue to rise, but profits stagnate. After going public in 2015, its stock price rose above $30 a share. However, as profits flatlined, its share price fell, trading back below its IPO price of $16 a share. Etsy’s survival hinges on its ability to retain its boutique appeal.

The timing of the Blue Apron (APRN) IPO could not have been any worse. Less than two weeks after Amazon’s $13.7 billion acquisition of Whole Foods, the New York-based meal kit delivery company hit the New York Stock Exchange and became the biggest IPO flop of 2017. Finishing its first day flat, shares of Blue Apron have tumbled below $7, making an all-time low of $6.23. 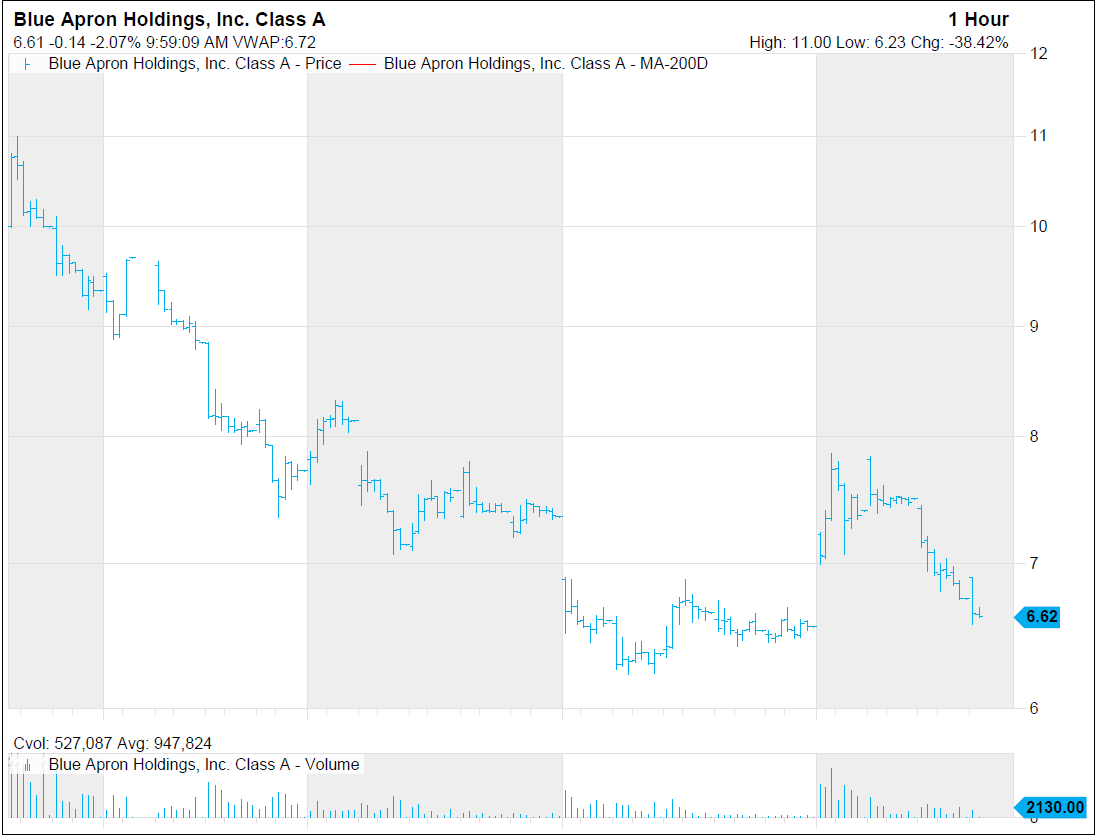 
The bad news for Blue Apron continued early July when Amazon announced it plans to enter the ready-to-eat meal business. Filing a patent with the slogan “We do the prep. You be the chef,” was the last thing Blue Apron investors wanted to hear.

Sports apparel retailers are already up against it. More competition, cheaper alternatives, and Millennials’ shopping habits have put pressure on the company to keep store sales up. Foot Locker Inc. (FL) earnings for the first-quarter were a big miss that saw the stock plunge 17 percent in one day, and the news that Nike – a big product for Foot Locker – will begin selling on Amazon was yet another blow for the flailing retailer. (See also: A Nike-Amazon Deal is Near.)

The news was a big hit for the industry as a whole. “Shares in several major sports chains hit 52-week lows on word that Nike may soon be selling its gear directly on Amazon,” the Associated Press said.

Every Grocery Store on Earth

Amazon’s recent shopping spree that included the $13.7 billion bid for high-end grocery chain Whole Foods decimated the supermarket industry’s stock prices in the four trading days since the offer. The overlap of a high-end supermarket brand and a trusted e-commerce giant is a scary thought for supermarket rivals.


A big dent to other food providers is Amazon’s access to Whole Food’s own 365 Brand. Consumers, will no longer have to leave the house to fulfill their organic shopping needs. The Trader Joe’s run, or weekend farmers market visit could be replaced by a click of the mouse.

The meteoric rise of Amazon is nothing short of phenomenal. What started out as a small online bookstore has grown into a $480 billion ship that continues to disrupt industries and change the way goods are consumed and distributed. As its partnerships and acquisitions continue, the company structure may look a little confusing. However, the way it got there is anything but confusing.

“We’ve had three big ideas at Amazon that we’ve stuck with for 18 years, and they’re the reason we’re successful: Put the customer first. Invent. And be patient,” Amazon founder Jeff Bezos said to the Washington Post.