Home Stocks These 10 Stocks Will Soar Against A Weak Dollar

That’s the worst performance it’s had since 2010…


At that time, we were just recovering from the great financial crisis of 2008. To stabilize the market, the U.S. Federal Reserve flooded the market with dollars.

And now, the dollar is behaving exactly as it did back then. 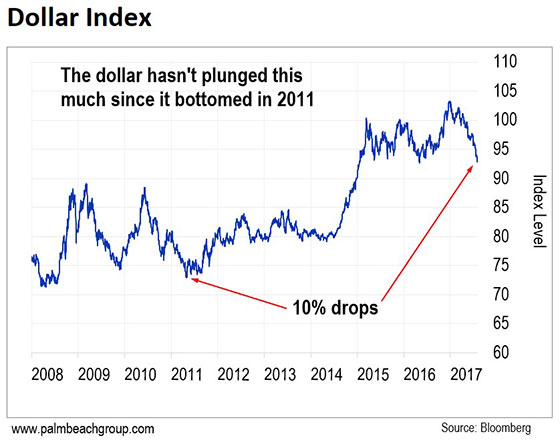 Yet this decline seems to have escaped the attention of the media.

That’s a shame… because the dollar might be the most important thing for U.S. investors to watch.

A change in the dollar affects the price of everything else—from the food you buy in a grocery store… to the gas you put in your car… to the stocks you hold in your portfolio.


In today’s essay, I’m going to show you how to use a weaker dollar to profit in the stock market.

A weak dollar can boost the bottom line of U.S. companies that do most of their business abroad. And that’s good news for shareholders.

Say a U.S. company does a lot of business in Europe. And in each of the past two years, the company’s profits were 100 million euros.

The magic happens when euros are converted into dollars.

Although the euro profits were the same in both years, the profits in dollars changed. See the table below:

So even though the company’s euro profits remained the same, it made more dollars the second year simply because the exchange rates changed.

As the dollar slides, U.S. multinationals will make bigger profits… and increased returns for investors in these companies

How to Profit From the Weak Dollar

With earnings season in full swing, look for large U.S. companies that make profits overseas and are about to report earnings.

And it doesn’t matter what the dollar does between now and the time they report. That’s because the quarter is already over for these companies.

Below is a list of major U.S. multinationals that are about to report earnings:

If you’re looking for a way to play the weaker dollar, you can start your research with this list.

There might be a nice surprise in their bottom lines.