Obamacare is here to stay. That’s the message we’re getting from Washington.

One of President Trump’s major campaign promises was to repeal the Affordable Care Act (ACA) — better known as Obamacare.

Despite majorities in both the U.S. House and Senate, Republicans couldn’t roll back the ACA.

After receiving a bill from the House… the Senate’s effort to kill the law ultimately failed in July.

This policy is not much different than Obamacare. It still has federal cost-sharing subsidies and a mandate that people buy insurance.

No matter what you think of Obamacare, it’s now here to stay.

In March, I told you that the biotech sector was cheap.

The price-to-earnings (P/E) ratio measures how much investors are willing to pay now for $1 in future earnings.

The adjusted P/E ratio looks only at the earnings of profitable companies. We like to use this because companies with negative earnings are valued on a different measure.

At the time, the sector’s adjusted P/E ratio for the biotech industry was less than the overall market… That was the first time in history that’s ever happened.

And that was despite biotech companies growing sales 10 times faster than the S&P 500. This made biotech stocks a great deal at the time.


I’m not talking about small biotech companies hoping to get a drug approved.

These are established and profitable multibillion-dollar companies… Companies like Gilead, Biogen, Celgene, and Amgen.

I knew the market had mispriced this sector. That’s because of uncertainty surrounding the Obamacare repeal.

Now it looks like Obamacare will be here for the long haul. And the people who bought health insurance under the law will continue to have their prescriptions covered.

Investors agreed with us.

Since I told you about biotechs in March, the iShares NASDAQ Biotechnology ETF (IBB) rose 15%. The S&P 500 is only up 4% over the same period.

As you can see in the chart, the adjusted EPS is in line with the market. 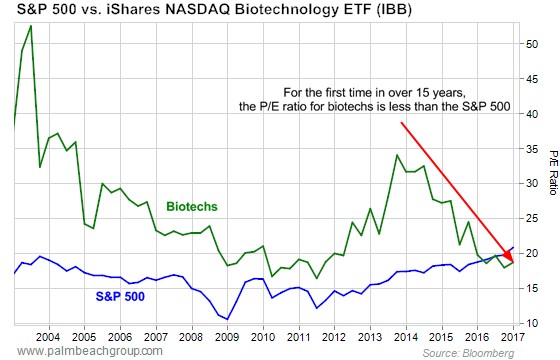 Not only is biotech cheap, but prices are also rising. Just a couple weeks ago, biotechs broke out to a new 52-week high. 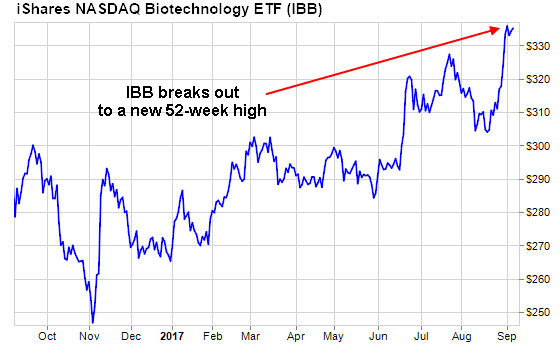 Here we have a cheap sector in an uptrend. This is one of my favorite fundamental setups. And when biotech goes, it really takes off. That makes this a perfect setup.

The results can be life-changing gains.

In the late 90s, biotech tried an encore performance. It rose only 1,500% then. But this rise was in just a couple years.


And after the Great Recession ended in 2009, biotechs rose 614% over the following six years. Not the biggest rally… but I’ll take 600% over six years anytime.

Right now, it looks like we are just getting started in another great run.

We are not too late to get in the rally. If history repeats itself, biotechs have another 418% to go.

The easiest way to play this is to buy shares of IBB. It’s a diversified basket of some of the world’s largest biotech companies.

Crux note: Biotech isn’t the only tech sector to surge since Obama’s term ended. The next 1,000%-plus gain will occur on America’s first new “stock exchange” since 1971.

Some people are calling this exchange the “new NASDAQ.” Already, over 900 companies have begun listing “shares”… shares you can buy TODAY for as little as $0.01. But the window will shut on December 31. Learn more right here…